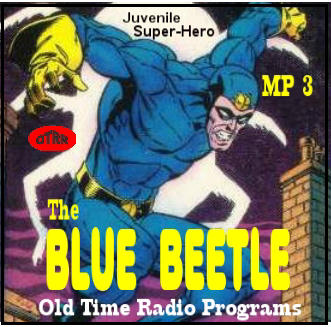 The exploits of Dan Garrett, a rookie patrolman who, by wearing bullet-proof blue chain mail, transformed himself into the mysterious Blue Beetle, a daring crusader for justice.

The Blue Beetle was created by Charles Nicholas. The character made his first appearance in August of 1939 in the comic book Mystery Men #1, published by Fox Features Syndicate.

The Blue Beetle radio serial aired from 05-15-40 to 09-13-40 as a CBS 30 minutes, syndicated series. Actor Frank Lovejoy provided the voice of the Blue Beetle for the first thirteen episodes. Later episodes were uncredited.

After his father was killed by a gangster's bullet, young Dan Garrett joined the New York Police Department, but soon tired of the slow pace and red tape of police work.

With the help of his friend and mentor, pharmacist and drug-store proprietor Dr. Franz, Dan acquired a costume of bullet-proof chain-mail-like cellulose material, and began a second life, fighting crime as The Blue Beetle.

His calling card was a small beetle-shaped marker that he left in conspicuous places to alert criminals to his presence, using their fear of his crime fighting reputation as a weapon against them. For this purpose he also used a "Beetle Signal" flashlight. The Blue Beetle's reputation was not his only weapon -- he carried a revolver in a blue holster on his belt, and was sometimes shown wearing a multi-pouched belt after the style set by Batman. Also in the Batman vein, the Blue Beetle had a "BeetleMobile" car and a "BeetleBird" airplane. In at least one radio adventure, he carries something called a "magic ray machine". The ray machine was a sort of super-scientific cutting device. OTRR Release Information:

Reviewer: Superlee - favoritefavoritefavorite - November 24, 2011
Subject: 3.5 Stars for The Blue Beetle!
I like this show a lot! Yes, it can be referred to as corny and even a bit cheesy, it's no "Box 13," no "Superman" and certainly no "Shadow" but that's ok with me. I don't mind a bit of cheese on my corn :) (sometimes :)
Reviewer: Poe1809 - favoritefavoritefavoritefavorite - June 29, 2011
Subject: .
As a comic book fan for the last 30 years(don't tell my anyone, especially my wife) I've always loved the different characters that operated under the name Blue Beetle. This radio show does a great job with the first character of that name, with good action, not made too deep by superfluous story elements, and even some humor. Yes, this is a product of its age with some of the sci-fi aspects, but it is a fun listen nonetheless.

The only knock is the sound. While you can stay hear and understand nearly everything, often it has a murky quality than makes you strain to hear. This would get a five otherwise, but one star off for the sound.
Reviewer: Anatoon - favoritefavoritefavorite - December 11, 2009
Subject: The Blue Beetle
I found this show doing a search for Frank Lovejoy as I always enjoyed his role in Night Beat. Frank has an excellent voice for radio.
What can I say, The Blue Beetle is rather corny, but I think it must have been aimed towards a young audience. Things like 'magic ray guns', Formula X-J, invisibility formulas, and the like are what children in the day were into. (Yes, back when they had imaginations).
I did listen to them all, the stories are original for the most part and still maintains an entertainment aspect.